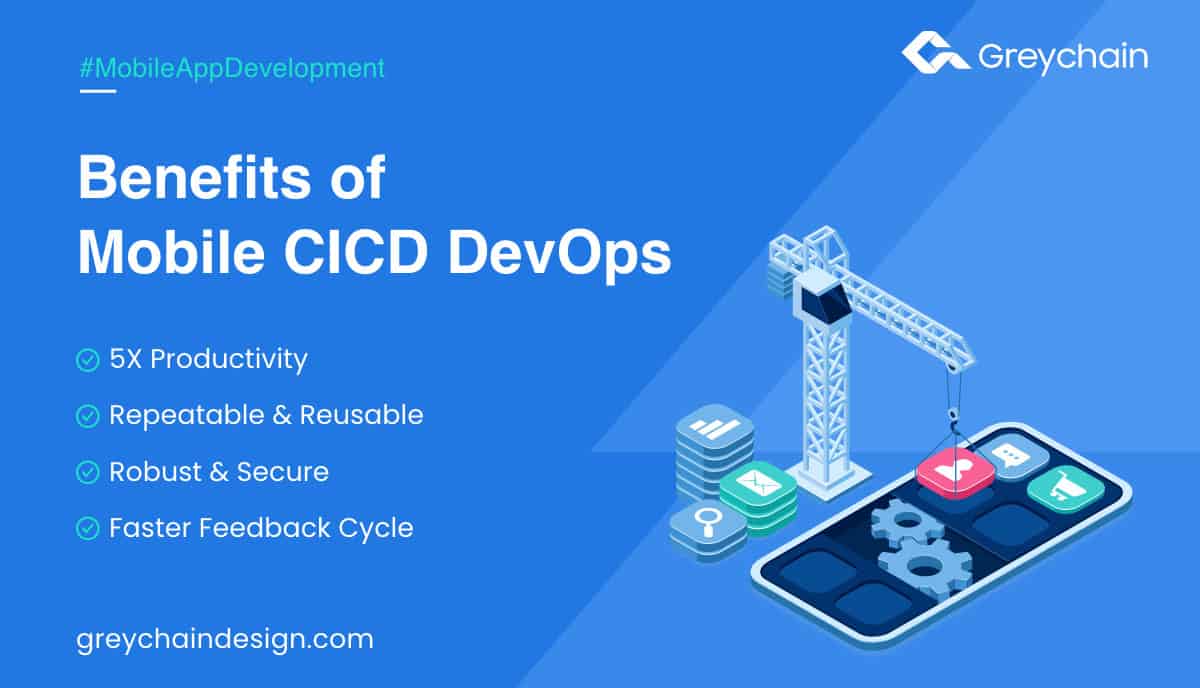 Have you ever made changes to iOS or Android mobile application and then dreaded the whole build and deployment process to Apple Appstore & Google Play Store?  Have you received non-secure apk files or iDiawi links for installation of test versions of Android & iOS apps? Mobile CICD pipeline will change the way iOS and Android development is done.

The mobile application release process often takes 3 to 4 hours and supervision from senior developers and development managers in the team while carrying out the delicate sequence of steps to build & deploy mobile application! To add to the misery, often a step is missed or something goes wrong, requiring a rerun of the whole process from start.

DevOps for mobile apps can take away the pain through use of mobile CICD pipelines that automates the whole process and make it seamless.

Mobile pipeline cuts down application deployment time to less than 20 minutes. A mobile CICD pipeline for Android & iOS can automatically be triggered on every developer code commit,  it builds their code, run tests & do releases directly to Google Playstore or Apple AppStore and sends out notifications for you to sit back and still be able to keep an eye on the whole process. All this without you even having to look at it once! Doesn’t matter if it’s once a day or 10 times a day! Saving atleast 3 hours per deployment!

There are no chances of any wrong configurations like mobile applications pointing to wrong analytics configuration or production app version pointing incorrectly to test environment backend services. Once the pipeline is up & running, you can forget all these worries and be sure about the robustness of the build and deploy process for mobile application.

With mobile CICD pipelines, developers no longer need to have access to any distribution certificates or private signing keys, they are safely encrypted, stored in secrets management stores that is password protected with zero risk of anyone able to lay their hands on them. For any organisation working with reputable enterprises knows how vital security is for clients and their secrets must be safeguarded.

With mobile CICD pipeline every step through the process is recorded and you can go back anytime to look at the details to know what happened at a given point of time. It’s easy to track back from a production build and know who made the change in code, who created the build, who uploaded it to store and much more. It makes it also easy to go back to any version at a single click, if anything goes wrong or any issue is discovered.

You might be working on multiple mobile applications together, once you have a pipeline setup for one, it’s simple and easy to replicate it over in few minutes for any new application. Saving ton loads of valuable developer’s time and improving the efficiency. Image saving 1 day of setup time per app and 3 hours per deployment. In a typical month you can save upto 30-40 hours of developer’s time.

After a developer commits his changes to a code repository, it can take a developer anywhere between couple of hours to a day to get the application version deployed on Apple Testflight & Google Play Store. He has to manually manage the application build versioning, code signing, environment configuration and then manual uploading of the files to AppStore and Playstore. It’s lot of valuable skilled development hours wasted on manual tasks.

With automated pipeline your developer doesn’t even needs to be aware of how and when his changes were automatically tested and released for user testing to a AppStore and Playstore.

Changes on your developer machine reach to your end users phones in minutes. Allows you to iterate faster, test your idea quickly and try your product in market. It’s multifold efficiency increase and cost save of 1000’s of dollars!

When you switch from manual process to CICD based setup the user can feedback literally on every individual change. Quick feedback means smaller changes and faster iterations with much better customer experience.

Developers are freed up to focus on functional deliveries rather than putting their valuable time into baby sitting the cumbersome manual process of build, test and deployment. No key man risk on one single developer who has all your key accesses.

All your private signing keys and distribution certificates are stored in encrypted secrets repository. Even if some one gets hold of them, they are encrypted so not useable by anyone. Only the automated CICD process on Gitlab has access to keys that can decrypt and use the keys. You no longer have a risk of a rogue developer in the team abusing your client valuable keys keeping your clients code and data secure.

You can view complete logs and audit of every action performed by the pipeline. So it’s easy to go back in time and track any changes, who made them, how they were built, which configurations and versions of dependencies were used etc.

7. Implement once use again & again

Once you have implemented a pipeline for one mobile application project, it’s trivial to reuse it repeatedly fo any new mobile application you plan to build. It’s one time effort & investment that pays for itself multiple times over.

We at Grey Chain Technology believe in leading by example. Every mobile application we build has a default CICD pipeline implemented using Fastlane & Gitlab, so our clients get the benefits of this automation right from inception and it helps saves them money that we partner with them to provide more features in their applications for same budget.

Thank you for sharing such a nice and informative Blog.