Angular vs React: How to choose the best framework? 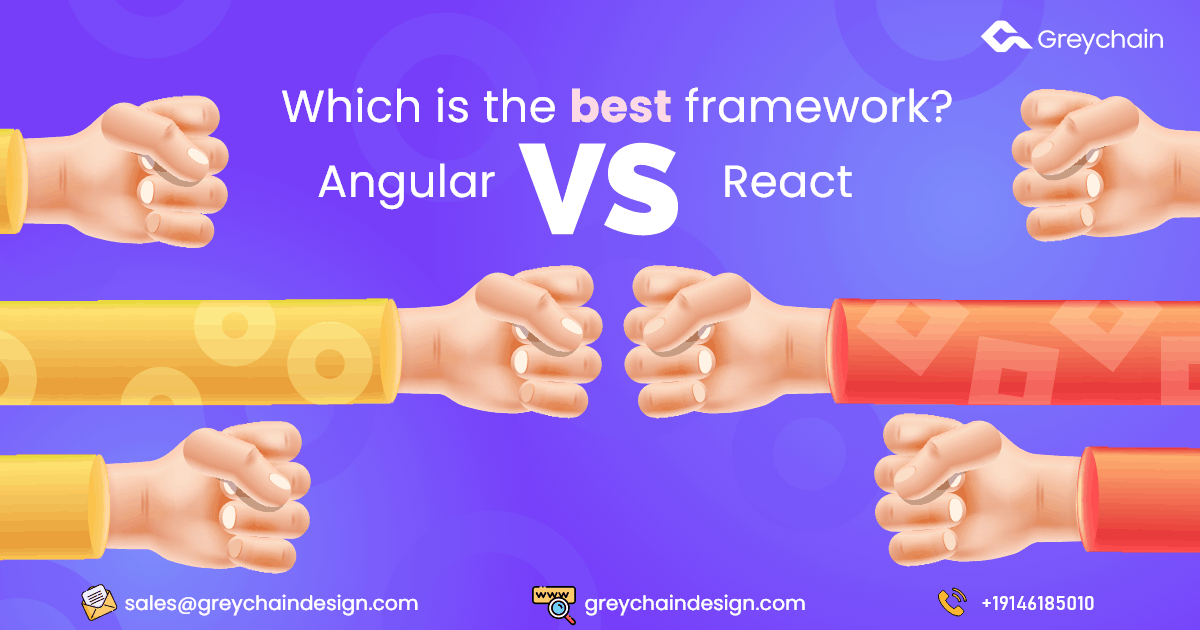 It is 2021 and there are a lot of popular technologies which have been used by different app developers to build specific web and mobile applications. When we look at modern apps, we certainly get impressed by the open-source javascript frameworks that they are using; mainly React and Angular.

So, how do you choose a framework for app development?

There is always a hesitancy to choose from Angular vs React, and we can completely understand the reasons. Besides, there are many resources over the internet which explain both technologies but fail to make an impact with proper knowledge or clarification. So, if you are still confused between Angular vs React js, then today’s blog will assuredly make things clear!

Let’s start with simple explanations to get a brief about both technologies:

Initially, Google’s Angular had some issues in terms of performance, and it was termed that Facebook’s React came with better-improved execution which accelerated the development process. Though, with time, Angular gradually enhanced the framework and developed as a better development resource; it also shortened the code bundles.

Nowadays, many front-end developers don’t prefer to work on the Angular framework as it is limited to default solutions. Whereas, React allows users to work independently and create their own environment.

So, should you choose React over Angular Development Tools?

Again, there are different ways to look into this. As we have discussed, Angular’s greatest flaw with performance has been ameliorated; besides, there are also developers who don’t feel comfortable working with React’s flexibility. Hence, it varies to each developer’s skills and complexity of the project development.

Consequently, it is not a matter of “who is best” but the answer to look for is “which framework suits your development requirements.” And, it would certainly change from project to project.

Don’ worry! We will explain the differences more precisely below, to help you choose the best framework for your app development projects.

If your team is proficient in backend, .NET, and Java, it is best to choose Angular. As there is less room for flexibility, it reduces the error rate. It provides a well-defined structure and has developers to try their hand on the default developed systems.

It requires serious skills to work on the platform; though it is user friendly and facile. In addition, it comes up with a basic set of development tools to choose from such as forms, routing, navigation etc. No third-party tools interaction allowed!

React is a modern and resilient platform, and highly recommended for front-end developers. It comes up with larger tools and better community support. In addition, it allows you to work with third-party plugins and services.

Generally, it is fast, scalable and even complex; hence, it requires attention to detail to avoid development flaws.

A Quick Review- Pros and Cons:

We are sure that today’s blog certainly dispenses a clear picture about both technologies. The different aspects mentioned above are some of the basic practices to choose between React developer tools and Angular development. In finding the answer for Angular vs React in 2021, we would say that each technology has its own importance and limitations. You will certainly get a constructive output using both technologies.

Nevertheless, it is integral to check your team’s ability, project requirements and client’s preferences to make a wise decision.

Grey Chain Technology is an expert, working with web and mobile app technologies for years. We are proficient in native, hybrid and cross-platform mobile app development.

Be it an android app, iOS app or flutter app development, we work on all platforms with equal ease.

Check out our Portfolio here!

We also provide a free app consultation, fill out the Contact Us form and our team will get back to you.

5 Reasons Why Should You Need UI Path in 2021?
Know Everything About the Upcoming Android 12 : Features & Launch Date Revealed
Close Menu
wpDiscuz